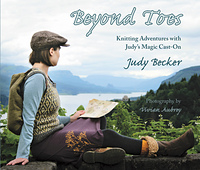 This book gives five ways to use Judy's Magic Cast-On (JMCO) besides toe-up socks. That's an idea I like. First, because I hate knitting things in pieces and then having to seam them. Second, because it's an idea I've already used. The brim of my Diamond Cap starts with JMCO. 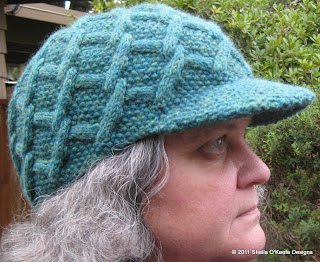 Great minds think alike. One of the patterns in the book is Laurel Jane's Cap by Deb Barnhill.


That's a very similar hat! I published my pattern in September 2011, which is when Ravelry says the book was published - which rules out any chance either of us influenced the other. Phew! I'd hate for another designer to think I copied them.

Once I got over the "OMG that's my hat" reaction, I took a closer look at the book. I like it a lot. There's a nice introduction where Judy gives a brief history of her knitting adventures. This is followed by a clear techniques section showing you how to do JMCO and the five new ways to use it. The book has a cute "treasure map" with the five ways on it: Provisional Bay, Tubular Reef, I-cord Island, Magic Bridge, and Double Straits.

I-cord Island uses JMCO to start a two-directional i-cord. A neat idea, even if the uses may be limited. The book has an absolutely adorable use, the tail for Pippa by Deb Barnhill


I can see using this to start i-cord straps for bags.

Magic Bridge is a great idea, using JMCO to add stitches in the middle of a project. The book uses it for a really interesting sock construction that starts with knitting the heel, Three-Point Socks by Jeny Staiman.


Looking at how the Magic Bridge works, I think it might be a great idea for adding the stitches in between the fingers for gloves. What do you call that point on your gloves? There was an interesting discussion of this topic in the designers group on Ravelry a couple of weeks ago. The terms thumb armpit and thumb crotch were mentioned.

Double Straits uses JMCO to start double-knitting. I have an idea in mind for a double-knit design and think I may try using JMCO when I get to developing that design.

The book includes 23 patterns making use of JMCO. I haven't knit any of them, but in a glance thru they look clearly written and nicely photographed, with charts and schematics as appropriate. A few that caught my eye:


Swept Off My Feet by Judy Becker is just too fun! I'm not sure I'd ever knit it, much less wear it, but it sure did make me smile!


I highly recommend this book. It's a great reference for how to do Judy's Magic Cast-on and all the many ways you can use this wonderful cast-on. My public library is insisting I return their copy tomorrow, so the book has been added to my Amazon wishlist.

{this moment} - A Friday ritual. A single photo - no words - capturing a moment from the week. A simple, special, extraordinary moment. A moment I want to pause, savor and remember.
If you're inspired to do the same,  visit Soule Mama and leave a link to your ‘moment’ in the comments for all to see. 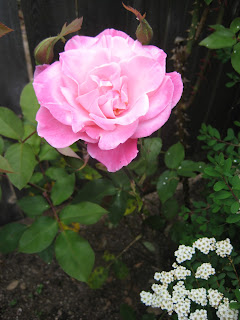 Email ThisBlogThis!Share to TwitterShare to FacebookShare to Pinterest
Labels: this moment


I'm playing Nerd Wars again on Ravelry. The Scientific Challenge this round is to make something inspired by the motions of the planets. I'm designing this hat using mosaic colorwork.

The main motif is the sun, with rays coming out the top, bottom, and sides. The white dot in the middle represents Venus transiting across the sun.

I'm knitting this out of Lion Brand Fishermen's wool in the natural and nature's brown colors. I'm really liking the way this is coming out and will definitely write the pattern up for sale.

I still haven't figured out what my Discworld tie-in will be for the Nerd Wars challenge, but I'm sure my teammates will help me come up with something.