A Bear For All Seasons 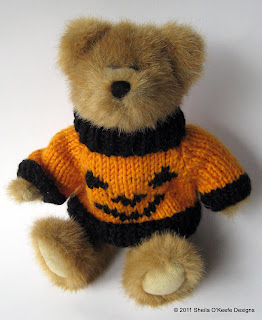 My birthday is in October so I sometimes get a little Halloween silliness among my presents.  Several years ago, in a package from my parents, I received this bear wearing a cute jack-o'-lantern sweater.

At the time I was in graduate school, studying physical oceanography at Oregon State.  The package with Teddy came to my campus address.  As part of my graduate research assistantship, I was responsible for upkeep of a string of coastal-based radar sites that measure the surface currents in the ocean.  The technology was relatively new and the sites could be temperamental.  We wanted a continuous record of the currents so it was a problem when a site went down.  Sometimes things could be fixed through a remote log in, but frequently I found my day's plans upended with an unexpected trip to the coast to cycle power on a system.  Believe me, driving an hour or two each way just to push a power button and head back home gets old really quick.

I doubt I'm alone in my tendency to anthropomorphize flaky computer systems, and I often felt the sites would wait until I turned my back to crash.  Theorizing that the computers got lonely, I set Teddy to watch over them when I wasn't there.  He looked so cute perched on top of a monitor, supervising everything.

Then, of course, Halloween was over and his jack-o'-lantern sweater was suddenly out of season.  This was Oregon State, home to the orange and black Beavers, so I tried for a little while to say it wasn't a Halloween sweater, but a Beaver sweater.  Even I didn't really fall for that.

There was nothing for it.  I knit him a fall sweater, then a Christmas sweater, and so on.  Soon Teddy had a seasonal wardrobe that he'd change into as the year cycled.

I'll have to confess he's spent most of the last few years in a box, ever since I finished grad school.  But last Christmas he came out in his Christmas sweater and he didn't get quite forgotten after the holiday was over.

A few weeks ago I joined Nerd Wars on Ravelry.  This is a competition among knitters representing various fandoms.  I joined Team UU (Unseen University), the team for Terry Pratchett’s Discworld novels. I love these novels. They’re a great mixture of fantasy, science fiction, and social satire. Plus they’re just plain laugh-out-loud funny. If you haven’t read them, get ye to your library today. While some characters do appear in multiple books, this isn’t a series in the traditional sense. There’s no need to read them in order from the beginning. Start wherever you like.

In Round 1 of Tournament 3 of Nerd Wars, the Nerd Culture challenge was to make a costume, for yourself, a pet, or a doll. Our Team Unity project was cheese. Death is one of my favorite characters, so I chose to make a Death costume for my teddy bear. 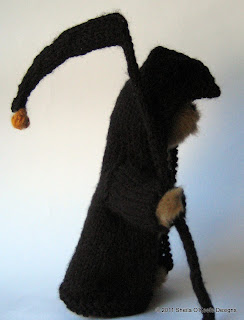 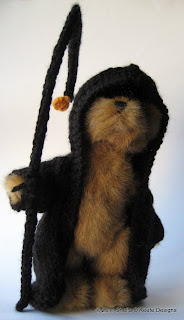 A recent reaping of a wizard at UU happened to occur while the wizards were at their cheeseboard (hardly surprising, given the wizards’ fondness for their cheeseboard). Death was feeling peckish so he used his scythe to help himself to a chunk of cheddar - you can see a cheddar crumb still attached to his scythe. He really needs to clean that.

Death of Teddies is available as a free pattern download from Ravelry until November 15, 2011.  Teddy's seasonal wardrobe of sweaters will each be posted free for one month over the course of the next year.  In October 2012 I intend to release an ebook for sale with a pattern for a knitted bear along with his entire seasonal wardrobe.
So download Death of Teddies now, before he's gone. 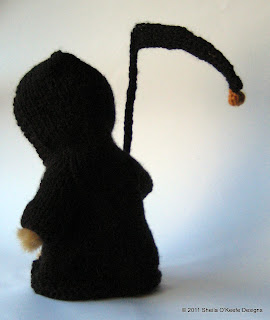 Okay, this post is a bit off topic for this blog, but there is fiber involved.  As you'll learn from this post, I'm pretty far left on the political spectrum.  I intend this blog to be mainly about knitting and design, but I'm sure my views will bleed into some posts.  Particularly as we move into next year's election.

Ten years ago Friday the USA started bombing Afghanistan and our country has been at war ever since.  I'm largely a pacifist.  War doesn't often seem to fix much of anything, and the costs, in both blood and money, seem too high.  Look at Afghanistan today.  What has ten years of war there gotten us or the Afghans?

Ten years ago Friday a group of concerned citizens gathered in Corvallis, Oregon, to hold a vigil protesting the war. I wasn't there.  I was opposed to the invasion of Afghanistan and emailed my representative and senators, but it didn't piss me off quite enough to make me take to the streets. 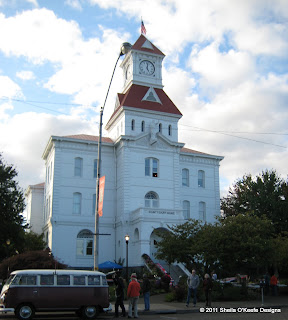 Isn't it a beautiful old courthouse?  Built in 1888.  We're lucky to have such a nice place to protest.  That old VW van is Ed Epley's.  He brings the signs in it most every day.  Ed's the one in the Beaver orange fleece.  Corvallis is the home Oregon State University so you see a lot of orange around town.

I got involved in the vigil in the fall of 2002.  That was when the Bush administration started pushing the invasion of Iraq, based on nothing but bald-faced lies.  That pissed me off enough to make me take to the streets.  So I started going to the vigil on a fairly regular basis.  I found a community of like-minded people there and made some really good friends. 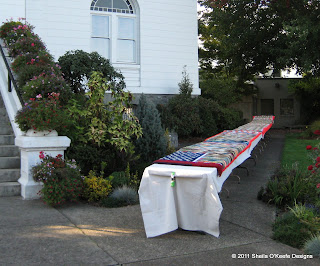 So this weekend was a landmark.  Ten years of war for the nation.  And ten years of protesting for the vigil. To mark the occasion, one of the vigil regulars, Carolyn Latierra, organized the exhibition of the Remembrance Rug created by Roger Asai, a former Marine who lives one town over in Albany.

This is an amazing latch-hook rug commemorating those who have died in Iraq.  (Told you there'd be fiber content). 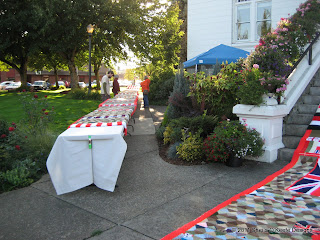 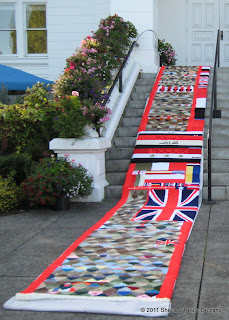 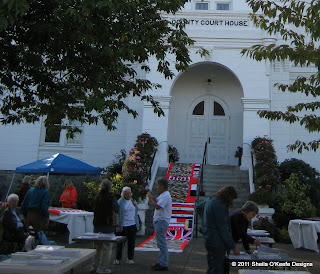 I can't imagine how much work Roger has put into this.  Here he is talking about the rug with some community members.

As well as the rug, he has 17 binders holding information on each of the fallen soldiers as well as civilians and journalists killed in the war.  Those are the binders lain out on the foreground tables.  It's possible to locate a soldier in the binders and then find the symbol representing them on the rug. 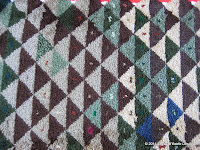 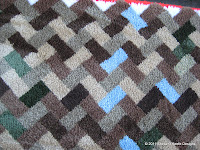 The rug is beautifully made and a moving memorial to the dead of the Iraq war. 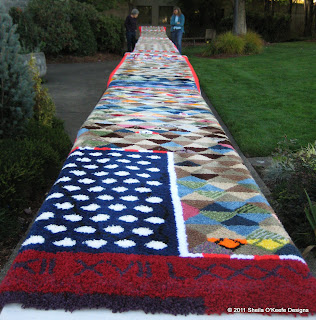 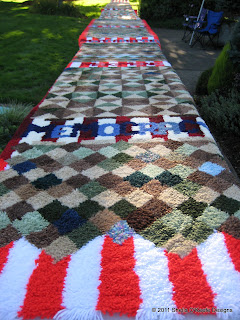 I helped with set up in the morning.  When we unrolled the rug on the tables and canvas along the steps, as a fiber artist, I of course wanted to pet it.  That felt disrespectful though, and I tried to resist.  Then Roger walked up with lint brushes, looking for people to brush the rug all in one direction, since rolling it can mush the yarn in places. Needless to say, I immediately volunteered and thereby got to pet the rug without feeling disrespectful. 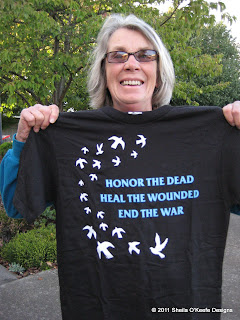 I don't go to the vigil much since Obama's inauguration.  I know he's escalated the war in Afghanistan, but he is getting us out of Iraq. I just don't feel the need to actively protest.  Obama is much more militaristic than I am, but so is the country.  So I'm resigned to not getting the foreign policy I'd ideally like and feel that Obama's foreign policy is better than I could have hoped for after the disaster that was Bush.  I'm glad I went yesterday though.  It felt right to commemorate ten years of war.  Plus I got to see a lot of old friends who I don't see often enough anymore.

Here's yesterday's organizer, Carolyn.  Thank you Carolyn for all the work you put into making yesterday such a successful event.

I'm glad I have a picture of her to add - I really took this picture because of the t-shirt she's holding up.  I can see those doves as part of a colorwork knitting motif.  Hmm... or maybe in lace?  See, I managed to bring the post back to fiber arts.

You can see the local news coverage of the vigil here and of the Remembrance Rug here.