The last couple of weeks I've noticed Alex Tinsley posting Favorite Things Friday on her blogs, Dull Roar and Classy as F***. Vivian of Spindleshanks recently started Favorite Things Friday with Star of Keep on Knitting in the Free World and Lee of talkin' under water also joining in. I really liked today's categories, Favorite Modern Convenience and Favorite Discovery. Alex said on her blog to email her if you want to join in, so I did. Now I've got a whole long list of categories in which to find favorite things for future Fridays. Today I'm catching up with last week's, favorite animal and favorite superhero/superpower, and this week's, favorite historical discovery and favorite modern convenience.

Without a doubt, the sea turtle is my favorite animal.


They're so graceful in the water. They get to live on coral reefs and bask in the sun. If I believed in reincarnation I'd want to come back as a sea turtle. Presuming, of course, that we don't drive them to extinction before I die. Hmmm... maybe a donation to the Sea Turtle Conservancy is in order.

This category is a bit harder for me. Comics superheroes like Batman and Superman have never really interested me. I like tv shows and novels with supernatural elements though, so maybe I'll go that way. Let's see. It'd be nice to be immortal like a vampire. Oh, but there's that slight problem that I have been known to faint at the sight of blood. And I get to craving the sunshine during Oregon's gloomy winters. Perhaps vampire isn't that good a fit for me.

How about magic? One of my favorite book series is The Dresden Files by Jim Butcher, especially the audiobooks read by James Marsters (aka Spike on Buffy/Angel). The hero of the books, Harry Dresden, is a wizard in Chicago. One of his oft-used spells is fire. Wouldn't it be fun to be able to shout "Fuego" and throw fire from your hand? Though I hope I'd use my power more for starting campfires rather than for taking out enemies like Harry does.

There's a lot of contenders in this category. This is, after all, a knitting blog, so I could pick knitting, but that'd be a bit trite, wouldn't it?

I feel obligated to go for at least a little originality or I'd copy Alex's pick of natural selection, which is what made me decide I needed to play along with the Favorite Things Friday meme. One of my favorite tumblrs is WTF, Evolution, which describes itself as "Honoring natural selection's most baffling creations. Go home, evolution, you are drunk."

Over on Keep on Knitting in the Free World, Star chose cave painting as her favorite discovery, and boy, could I second that, though I'd go for the petroglyphs. I do love petroglyphs and have even knit them, like my Hawaiian petroglyph sweater. 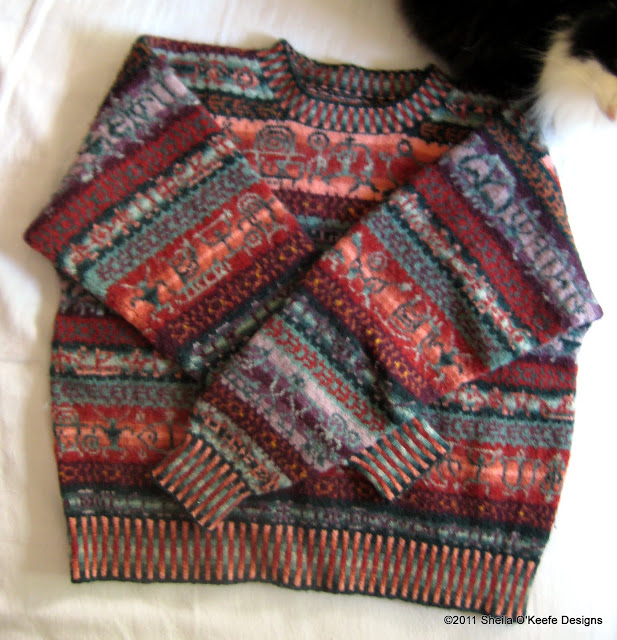 Cave painting and petroglyphs got me thinking of basic discoveries, and suddenly I knew what my favorite discovery is - written language! Imagine a world without writing. Communication would be so hard. No novels, no newspapers, no blogs, no Ravelry. It doesn't bare thinking about.

This one's a no-brainer. Contact lenses. I can't imagine living without them. I haven't been able to see at a distance without glasses since I was a small child and these days I can't read or knit either. I wear these multifocals.

I even sleep in them so I only need to remember I can't see naturally once a week or so.

Except when I read or watch a time travel show like Primeval or read a post- apocalypse novel like The Dog Stars. Then I realize I'd be worthless in these situations. Within no time I'd be blind as a bat. Seriously, why isn't anyone on The Walking Dead the walking blind?

The Twilight Zone at least got it.

And those are a few of my favorite things.